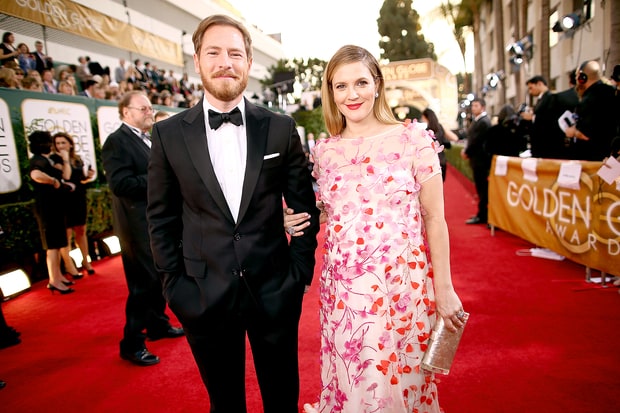 Barrymore married her first husband, Welsh-born Los Angeles bar owner Jeremy Thomas, at age nineteen on March 20, 1994.  She filed for divorce from him less than two months later.  By many accounts, the split-up was much less than amicable.  Barrymore dated MTV host and comedian Tom Green in 1999, before getting engaged in July 2000 and married a year later.  Together, they starred in Charlie’s Angels and Green’s directorial film debut Freddy Got Fingered. Green filed for divorce in December 2001, which was finalized on October 15, 2002.  In early 2011, Barrymore began dating art consultant Will Kopelman, the son of former Chanel CEO Arie Kopelman.  The couple announced their engagement in January 2012, and married on June 2, 2012 in Montecito, California.  Four days later, the couple’s wedding image appeared on the cover of People magazine.  Barrymore and Kopelman have two daughters: Olive Barrymore Kopelman (born 2012) and Frankie Barrymore Kopelman (born 2014).  On April 2, 2016, Barrymore and Kopelman released a statement confirming they had separated and intended to divorce.  On July 15, 2016, Barrymore officially filed for divorce, which was finalized on August 3, 2016.  On the Ellen show Barrymore said “It was just like my worst nightmare. I so wanted to raise kids in this ultratraditional way and do everything so the polar opposite of my experience.”  We hope marriage number four works out for Drew.