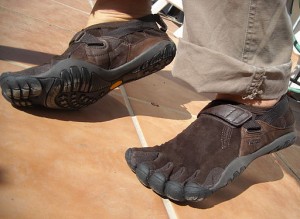 Barefoot running might sound insane or perfectly natural to you. This fitness trend has been around for a few years and does not show any signs of dying out.  The benefits of barefoot running and the new lines of footwear it has inspired are still not fully understood.

In the 1960’s non-atheletes started running on a regular basis as a form of exercise. Running has remained popular ever since because it a practically free form of exercise that nearly anybody can take up. The footwear associated with running has been anything but free. Our interest in sports-specific shoes has been on the rise since the 1960’s and has shown no signs of stopping. The US running shoes business is a 6.7 billion dollar industry

Ironically, Even this recent barefoot running trend has inspired a whole new generation of running shoes.  If you are a proponent of “bare foot” running you now have a huge selection of shoes you can pick from: 5-fingered shoes that fit like gloves, sandals designed for distance running, and minimalist sneakers.

Is all this change to our running footwear a good thing? Many would say yes, but the truth is we do not know. Research has been unable to clearly identify the ideal running shoe. In fact, if anything, research has demonstrated that our running shoes may have very little to do with preventing running injuries at all.

Barefoot and minimalist shoe advocates claim that the solution to our nagging running injuries is less footwear, not more. However, research has not been able to conclusively prove that wearing minimal footwear will reduce your risk of a running injury.

More than any other factor, your gait and running form will effect you risk of sustaining a running injury. Now this is where the shoe debate becomes interesting…

We all have an instinctive or preferred running style; we might be rearstirkers, midfoot strikers, or forefoot strikers.

Research has demonstrated that barefoot and minimalist shoe-wearing runners tend to favor a midfoot or forefoot running style, while traditional running shoe wearers tend to be rearfoot strikers. Thus, your shoe might determine your stride.

Rearfoot strikers land with significantly greater force than midfoot and forefoot strikers. So one might argue that a midfoot or forefoot strike is less stressful on the body and therefore will cause less injury.

The bottom line is that your gait is more important than your shoe. If you have been struggling with chronic running injuries you may need to work on your form. Changing your shoe might help you find a running style that suits you better but, don’t expect a shoe to be the magic bullet. Running is a sport, and like all other sports you need to practice in order to obtain good form and develop your skills.