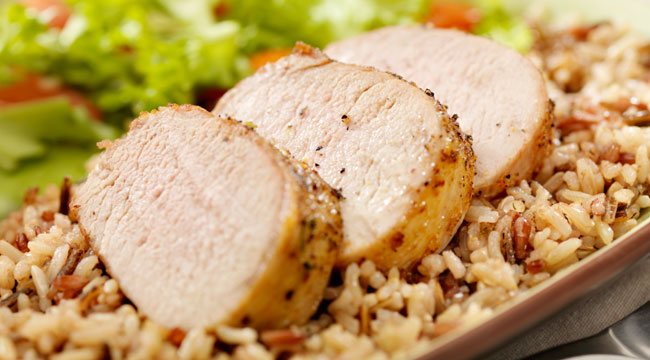 While working in the gym, you have probably overheard a conversation about how many meals should you eat per day. I bet that your instructor or your working partner told you to eat at least 5-6 meals per day and you decided to do as you are told. But is that the best solution for you?

It is time to expose all the myths related to eating smaller portions several times per day!

Supporters of eating frequent meals are claiming that the human body wants to maintain enough energy to survive the next famine. If you don`t consume food for a couple of hours, your body will go into a starvation mode and it will try to conserve energy by slowing down its metabolic rate.

These claims sound very logical, but let’s see what recent research shows. LeBlanc came to a conclusion that feeding dogs with four small meals per day doubled the thermogenic response, compared to eating the same amount of calories in just one meal.

On the other hand, a lot of studies have failed to show that meal frequency has a significant effect on energy expenditure. It is logical to argue against any enhanced effect of eating frequently on a dietary thermogenesis. Thermogenic enhancements from frequent meals are associated with the thermic effect of food (TEF).

TEF is the energy used as heat resulting from the digestion of food sources. Fats cause the least expenditure and protein the greatest. The TEF of an average meal is about 10% of calories consumed.

If you consume 2400 calories over three 800 calorie meals, the TEF would be 80 calories per meal – three meals multiplied by 80 calories gives a total TEF of 240 calories.

You have probably heard that eating smaller frequent meals is better for weight loss, as our bodies consume calories while digesting food. So if you eat frequently, your body will consume more calories.

Let`s see what science has to say about that!

“Several epidemiological studies have observed an inverse relationship between people’s habitual frequency of eating and body weight, leading to the suggestion that a ‘nibbling’ meal pattern may help in the avoidance of obesity. A detailed review of the possible mechanistic explanations for a metabolic advantage of nibbling meal patterns failed to reveal significant benefits in respect of energy expenditure. There were some studies that suggested that the thermic effect of feeding is higher when an isoenergetic test load is divided into multiple small meals, however newest studies refute this, and most studies are neutral.” It was concluded that there is no evidence that weight loss on hypoenergetic regimens is altered by meal frequency.

It is logical to think that eating small frequent meals will cause a greater feeling of fullness. To see if that is the case, we turn to science, once again.

The University of Kansas conducted a research about the effects of meal frequency and protein intake on perceived hormonal responses, satiety and appetite in overweight men. They concluded that 3 meals per day led to a greater feeling of fullness, compared to eating 6 meals per day.

However, you can find studies that came to a conclusion that participants were less satiated eating 3 meals per day and that increased meal frequency resulted in increased feelings of fullness.

The truth is, there are a lot of variables involved and it would be incorrect to state what meal frequency for hunger control is the best for everyone!

However, studies show that eating fewer, larger meals will result in having a lower blood glucose levels. (4) Even thought they had bigger “spikes” in blood sugar, overall their levels are much lower. This fact is very important for people with blood sugar issues, as elevated blood sugars can cause all sorts of problems.

Skipping Meals From Time to Time

Intermittent fasting is the newest topic in nutrition today. It requires that you abstain from eating at certain times, such as skipping lunch every day. For most people, that makes no sense, as it would put you in a “starvation mode” and make you lose your muscle mass.

However, science says that they are wrong, again.

Newer studies show that metabolism is increased in the beginning and after 2-3 days the metabolic rate goes down. (8, 9, 10).

It also induces autophagy, a cellular clean-up procces. Body`s cells not only clear up waste products, but also contribute to aging. (12).

Did you know that the process of eating is stressful to our bodies and digestive stress ages you and causes inflammation?

If you eat more meals per day, your gut will never have a chance to fully heal, your enzyme pool will not get replenished and your digestive system takes a beating. As all the systems in the human body depend on each other, when digestive health is compromised, nothing will function properly. Eating less frequently allows your body to heal and replenish itself.

How Frequent Is Frequent Enough?

The number of meals you eat in one day should be a divisor of the total amount of calories you input, if you want to optimize your satiety and anabolism.

It is now quite clear that the myth of frequent, small meals is just a myth. Research doesn’t support the idea that eating more frequently stokes the metabolic furnace.

Eating more often has no health benefits, as it doesn’t raise metabolism and it doesn’t improve blood glucose control.

So, how many meals per day should a bodybuilder eat?

It is best to experiment with different meal frequencies and learn what works best for you. You should choose a meal frequency that fits your lifestyle. If you prefer eating frequently throughout the day, stick to that. On the other hand, if you like consuming just a few large daily  meals, then go for it. Just be consistent with your regime, as there are some evidence that irregular eating patterns may negatively alter your metabolic function.

It all comes to this:

In the end, try to avoid these diet mistakes:

Don`t change too much too fast

One of the most common mistakes is changing too much too fast. It will not give you the wanted results. Instead, try baby steps, as small progressions are less overwhelming and much easier. Also, if you make your workout too difficult, there is a chance you`ll quit, as your training will not be fun anymore.

Spending time in the kitchen

Most people spend too much time preparing the food in the kitchen. You need to know how to maximize your efforts and not to waste time on cooking more frequently than you need.

Reliance on supplements is one of the worse things you can do. Supplements can`t be a replacement for your meals. Your body will respond very well when you change your eating patterns and start eating high quality food.

If you want to make a huge progress, you will have to be very disciplined. You must work hard and eat healthy. Forget your old habits and leave them in the past. If you are consuming fast food, chips and alcohol, you won`t get the wanted results. It all comes to this: Try to limit bad things and only focus on the good things.

One big illusion is that a bodybuilder`s diet is just based on chicken, rice and veggies. If you just Google the internet, you`ll find a large variety of healthy, delicious meals. Always try to avoid boredom and tasteless meals.