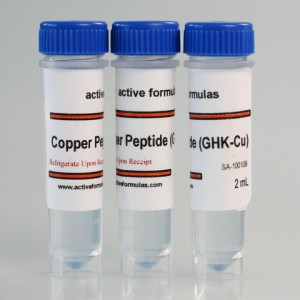 Copper peptide, particularly GHK-Cu, was discovered by Dr. Loren Pickart PhD in the early 60s. The goal was to find something to prevent aging. In the later part of the research, he found that GHK-Cu is released during tissue damage to help in healing. Nowadays, copper peptide is popularly found in high quality anti-aging and beauty products. However, copper peptide benefits not just the skin. It proves to be also beneficial to various organs in the body. Here are some if its positive effects to the body:

Based on six placebo controlled studies, copper peptide is effective for skin remodeling. Many beauty products such as anti-aging creams have this because it improves the appearance of wrinkles, photo damage and hyperpigmentation. It also increases firmness by increasing collagen production and synthesis. It strengthens the skin’s protective barrier and improves the growth of keratinocytes.

GHK-Cu was tested in rats for any effects on hair follicles. The results showed that there was reduced hair loss and increased hair recovery after chemotherapy in rats. In humans, hair growth also increased after application. Those who underwent hair transplant experienced lesser rejection of the transplanted hair. These are all because copper peptide was found to increase stem cell production when applied in a cell culture.

Since initial studies found copper peptide to effectively heal tissue damage, GHK-Cu was also tried in patients with Crohn’s disease. It was found that it can help heal ulcers in the stomach and intestines. In rats, it was even found to block ulcer development in the duodenum.

5.      Other non-human effects of copper peptides

Based on studies conducted in mice, rats and pigs, GHK-Cu increases production of red blood cells as well as resistance to bacterial infection. It effectively blocked damage caused by dichloromethane in the liver. In pigs, copper peptides showed promising results in bone injuries. It hastens bone injury repairs as well as it improves the attachment of endoprosthesis such as during hip replacement. Copper peptides may also have possible benefits on lungs, kidneys, gingival tissue and nerves. However, this aspect needs further studies and evaluation since there is still no evidence to support such theory.

Although copper peptides seem very promising especially in the aspect of tissue repair and skin treatment, the use of copper peptides must be controlled and regulated. Excessive application, especially when free copper is released, causes collagen to breakdown faster. It also triggers the production of metalloproteinases which can cause the appearance of wrinkles and skin sagging. Fortunately though, excessive application is rarely seen and the adverse effects are purely based from anecdotal reports.