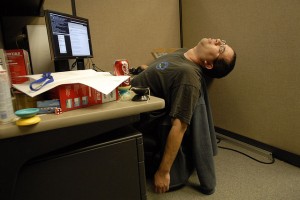 Many people get up in the morning, sit down in their cars and head to work- where they will sit for another 8 hours (or more) at the office. When the day is done, they’ll sit back in the car and head home where they might sit for another 4 hours before going to bed. Does this sound like you?

Daily habits of the average person have become increasingly sedentary and researchers are starting to ask “is sitting too much bad for your health?”

A recent wave of studies have found that the average U.S. adult is sedentary for 60 percent of their waking hours and sits for an average of six hours per day. This is often much higher for those who work on computers or office environments.

So I sit a lot? Is it sitting actually bad for me?

A study conducted by the Department of Biomedical Sciences at the University of Missouri-Columbia found that sitting decreases the activity of an enzyme called lipoprotein lipase (LPL), which helps burn fat.

According to a 1998 study conducted by the University of Texas Southwestern Medical Center at Dallas, too much time spent sitting decreases bone mineral density without increasing bone formation. That means an increased risk of fracture.

A study published in the journal of Applied Physiology, Nutrition and Metabolism found that excess sitting increases blood pressure while decreasing the diameter of arteries. Combined, these increase the risk of heart disease.

Researchers at the American Cancer Society have found that people who sat for more than 6 hours per day increased their risk of death over the next 15 years by 40 percent compared to those who sat for less than 3 hours per day. Plus, this effect happened regardless of whether the study participants exercised.

According to a new study by researchers from the American Cancer Society, The Cooper Institute, and the University of Texas, the more time a person spent sedentary was significantly associated with higher levels of systolic blood pressure, total cholesterol and triglycerides, in addition to lower levels of “good” cholesterol (HDL). Research also was associated with BMI, waist circumference, and body fat percentage.

The American Cancer Society study appears in the journal Mayo Clinic Proceedings and further found that the association between increased sedentary time and obesity and blood markers associated with cardiovascular disease is significantly reduced when taking fitness into account.

Cardiologists at UT Southwestern Medical Center found that sedentary behaviors may lower cardiorespiratory fitness levels. New evidence suggests that two hours of sedentary behavior can be just as harmful as 20 minutes of exercise is beneficial.

The research indicates that a sedentary lifestyle may increase risk through lower fitness levels and simply avoiding too much sitting could be a significant step toward improving fitness and health – even if it’s outside of a regular exercise routine.

According to Dr. Jacquelyn Kulinski, a recent graduate from the UT Southwestern Cardiology Fellowship Training Program and first author of the paper, “We also found that when sitting for prolonged periods of time, any movement is good movement, and was also associated with better fitness.”

Did you notice a trend? Whether you exercise or not, sitting too much has many negative consequences! However, even if your work requires you to sit a lot, there are things you can do to reduce your risk.

Tips for decreasing the consequences of sitting too much

Increased risk of heart disease, bone density, blood pressure, cholesterol, and even death may sound scary, but there are ways to fight back!

Move More. It sounds simple, but taking a brief walk or doing some light stretching will increase blood flow and decrease sitting time. It also gives you time to clear your head and get refreshed before your next work session!

Set Reminders to Sit Less. If at work, take at least 2 minutes every hour to get up and move. Set an alarm on your phone or use an app like “Time Out” (Mac) or “Workrave” (Windows).  If at home, use commercial breaks to get off the couch and move around for a few minutes.

Change Your Desk. Many corporations and offices are switching to “standing desks.” As research indicates more health risks associated with prolonged sitting, more workplaces are warming to the idea of standing desks.