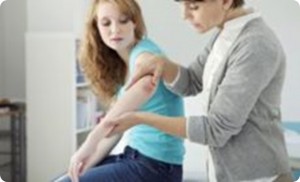 Eczema is an  auto-immune disorder that makes the skin hypersensitive to its environment. The cause of eczema is somewhat vague to researchers and clinicians. Most of the time, eczema is accompanied by asthma or another form of allergy. Depending on the type of eczema, the affected skin may appear red or brownish in color. There are no scales formed in eczema. It mostly affects the hands, feet, elbows, knees, ankles, arms, chest, face and the area around the eyes. One characteristic of eczema is it appears symmetrically on both limbs. Most of the time, eczema is itchy especially at night.

Psoriasis, on the other hand, is also an auto-immune disorder that results in build-up of skin cells in a local area due to overproduction. The overproduction results to the formation of silvery white scales. The area can become red and inflamed too and also itchy. Psoriasis can appear anywhere in the body. The presence of patchy, white scales sets the difference between psoriasis and eczema.

Eczema and Psoriasis: An In-depth Look

A recent study conducted by the Entrepreneurial University (TUM) found the pathological changes happening in both eczema and psoriasis. The study, which was conducted in Munich, Germany, looked at the genes of 24 patients with age ranging between 18 and 60 years old.

Based on their observation, in eczema, certain cells block the immune response of the skin. These cells block the skin’s barrier too. The presence of eczema makes the skin more susceptible to secondary infections brought about by viruses, bacteria and fungi.

Whereas, in psoriasis, the pathological reaction is similar to wound healing. The hyperactive immune response results to the overdevelopment of  skin cells, resulting to scales. The skin regenerates more than it can exfoliate. Retinoid is effective in controlling the rate of growth of new cells. It also helps control the existing inflammation.

The researchers studied various genetic and environment factors in psoriasis and eczema. They found two classifier genes that can be used for future diagnosis – CCL27 and NOS2.

Accuracy of the Two Gene Classifiers

Based on their initial trial, the researchers were able to identify all 25 psoriasis and 28 eczema cases correctly, meaning, it has a 100% accuracy.

The two-gene classifier test is expected to lessen misdiagnosis and help save patients from a wrong set of treatments.

In addition, the test can return results quickly (within 24 hours). Currently, the test is being processed for patenting. As soon as it is approved, more effective treatments and managements can be given to eczema and psoriasis sufferers.