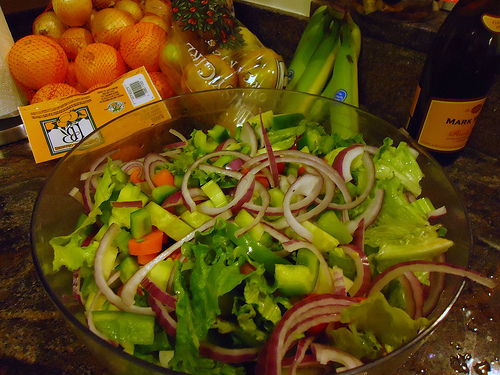 Putting the salad in a clear bowl makes it more attractive to eat.

These kitchen tips and tricks prove that our environment can have an influence in the way we consume food. Be careful in choosing the right kitchen and eating utensils. It could cost you a few pounds. Here are seven useful tips to help you lose weight.

According to a field study on The Influence of Bite Size on Quantity of Food Consumed, fork size has an influence on the amount of food typically consumed by customers in a restaurant. The researchers found that less food is consumed when a larger fork size is used. Unfortunately, more food is also left on the plate. The reason behind this is that consumers think they are eating more when using a larger fork. Therefore, they tend to keep their meal consumption minimal.

Using Delboeuf Illusion, people perceive food portions as larger than actual when placed in a smaller plate than in a larger plate. Therefore, if you want to eat less, chose smaller plates instead.

4.     Eat off a plate in high contrast color with your food

5.     Put veggies and fruits in an attractive clear dish or bowl

A team of researchers actually used candies and chocolates in their study. Actually, the main objective of the study was to establish the increase in food consumption when a candy bowl is in close proximity. However, it also touched upon the subject of transparent versus opaque bowls. It was found that food consumption increases when candies are placed in a clear bowl. To turn this into something positive, put fresh fruits instead of candies in the bowl.

Based on the vertical-horizontal illusion, we often notice the vertical alignment and size of an object first before its width. In a study conducted by the Food and Brand Lab in a health and fitness camp, teenagers were randomly given tall and short glasses (with the same volume) in a cafeteria. Those who were given short glasses reportedly consumed 75% more beverages. They thought they were given a smaller glass which made them pour more.

Our body needs to burn calories in order to keep our normal body temperature at 98.6 deg F. If we feel cold, our body tends to crave for high fat and high carb foods. Meanwhile, if the weather is quite warm, our body looks for cool foods such as those with high water content (salads, fresh fruits and vegetables).

After reading these kitchen tips and tricks, you now have a better understanding and proof that our environment can have an influence in the way we consume food. Be careful in choosing the right kitchen and eating utensils. It could cost you a few pounds.