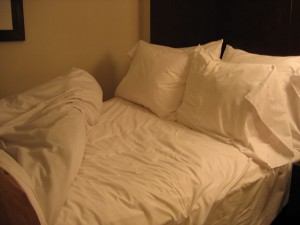 Weight loss is synonymous with diet and exercise. If you’re serious about dropping a few pounds, changes to your diet and some exercise will often get you there. But what if they don’t? You may need to investigate the connection between sleep and weight loss.

The Centers for Disease Control and Prevention has reported that 28% of U.S. adults report they are consistently sleep deprived and they sleep six hours or less each night. In fact the CDC calls insufficient sleep “a public health epidemic.”

In addition to being detrimental to your quality of life, research has found that sleep deprivation can interfere with your efforts to slim down. Sleep and weight loss are connected in a variety of ways.

5 connections between sleep and weight loss

Sleeping less might “activate your fat genes.” Does obesity run in your family? There could be a genetic component contributing to that trend. An American Academy of Sleep Medicine research study found that sleeping less at night may increase the expression of genetic risks for obesity. On the other hand, the study found that getting plenty of sleep may suppress genetic influences on body weight. Therefore, even if you have a genetic tendency toward obesity, getting enough sleep might be able to counteract bad genes.

Sleep deprivation can make you hungry. Eve Van Cauter, director of the Sleep, Metabolism and Health Center at the University of Chicago, says that sleep deprivation can effect the hormones that control you hunger level. Going without sleep can up your levels of a hunger hormone, ghrelin, and decreased levels of the fullness hormone, leptin, which could lead to overeating and weight gain.

Tired brains make bad food choices. You may already be familiar with the ‘brain fog’ that comes with sleep deprivation, but did you know that same brain fog can derail your diet? Researchers at Harvard Medical School performed brain scans on people who reported high daytime sleepiness and measured their brain activity in response to high-calorie foods. The scientist found that their sleepy study participants had reduced activation in the ventromedial prefrontal cortex, which is an area of the brain that is responsible inhibition and behavior control. Thus, tired brains are more likely to overindulge in high-calorie foods.

Your fat cells need sleep in order to function properly. Many medical studies have found that sleep deprivation reduces fat cells’ ability to respond properly to the hormone insulin. When your fat cells and insulin are working well together, they remove fatty acids and lipids from your blood stream and prevent storage. If this relationship between your fat cells and insulin becomes imbalanced, excess insulin ends up storing fat in all the wrong places, like your liver. If this imbalance is not corrected, you can become obese and get diabetes.

If you are concerned about your weight, consider how your sleeping habits might hinder your weight loss efforts. If you are sleep deprived, diet and exercise might not be enough to help you get into shape.